Five future Bantam softball players made an impact at the North-South All-Star Softball Games on June 13th.  One junior and four USC Union commits were honored for their outstanding high school seasons. Four out of the five players will be incoming freshmen fall 2018 at USC Union.

Alexis Odum, a senior from Lewisville High School, represented the North 5A/2A/1A team. On May 16th, 2018, Odum’s high school team won their Class A state championship. In the bottom of the fifth inning, Odum knocked in a run to extend the lead to 3-0 and solidify the shutout. Odum is a left-handed outfielder and batter, and she will be essential in the second official season for the Lady Bantams.

Emilee Price, a senior from Dillon High School, competed for the South 4A/3A team. Price was also honored with making the 3A All-State Team. Price is a strong defensive player. In high school, she played a wide range of positions: outfield, middle infield, 3rd base, and catcher. She finished her high school senior season with a .491 batting average and .547 on base percentage. She had 16 RBI’s and scored 21 runs. Price will be a strong defensive and offensive contribution to the Bantam’s 2018-2019 season.

Summer Clinton, a senior from Lancaster High School, made the 4A All-State Team and represented the North 4A/3A team. She also was awarded the Region III-AAAA Player of the Year. Clinton is a pitcher and plays outfield. At the end of her high school career, Clinton had 70 strikeouts with a .960 fielding percentage and a .500 batting average. Clinton will be a powerful force on the mound for the Lady Bantams.

Grace Revels, another senior from Lancaster High School, also represented the North 4A/3A team. Revels is a solid defender behind the plate. Revels and Clinton will continue their softball career together at USC Union. The Bantam coaching staff is eager to have the dynamic duo for the upcoming season. 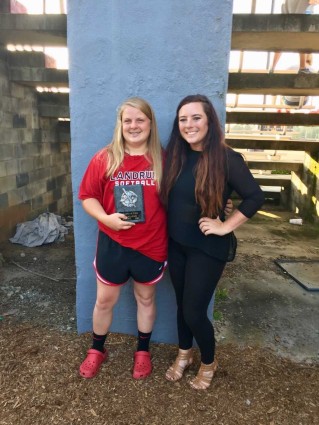 Caitlyn Cox (pictured right), a junior from Landrum High School, made the 2A All-State Team. Cox had an impressive junior year as she dominated the mound with 78 strikeouts overall and a batting average of .488 with 10 home runs. In the Fall of 2019, Cox will attend USC Union as a freshman. She will be a great asset to the USC Union team as a pitcher and power hitter.

“I am extremely proud of my future players for representing themselves at the North and South Games,” says Amanda Warley, USC Union Athletic Director and Head Softball Coach, “These girls are hard workers. They deserve to be honored for their achievements.”

The USC Union campus is buzzing with electricity over the new talent coming in for the 2018-2019 school year. All the athletic teams represent USC Union and the community with dignity and pride on and off the field. All future Lady Bantams will have a significant part in the success of the USC Union softball program.

“All of the new recruits coming in have great potential,” Warley says, “Over the next few years, I strongly feel that the new talent will bring a lot of success for the USC Union softball program.”

Start Here. Stay Here. Finish Here. We offer flexible degree programs including associates degrees, bachelor's degrees and online options to make that happen. Our dual enrollment programs give high school students the chance to start their college education while they're still in high school. That means a quicker path to a degree and a career. Whatever your career goals are, we can help you meet them. View all posts by uscunionbantams